A murmuration of starlings at Gretna. Photo: Walter Baxter via Wikimedia Commons

Flocks of birds are a phenomenon that have always intrigued me. Watching how different birds go about it has fascinated me all my life. There are those obscure little flocks of twittering tits that flit about the hedgerows in winter, and there are those massive and spectacular starling murmurations that fill the dusk skies with choreographed magic.

Goldfinches flock to thistles and flocks of redwings fly over the town in winter (you can hear their little whistles as they pass over). Sparrows still flock in garden bushes; parts of south Reading should be famed for their spudgers! They are rare now elsewhere, but they seem to like Whitley and do well here.

The names we give to flocks – a charm of goldfinches, a murmuration of starlings, a clattering of jackdaws, a murder of crows, a skein of geese or a wisp of snipe – have some resonance, even if we have lost the reasons these collective nouns were given.

Sadly, the great starling murmurations in Reading have gone, but they might be coming back. Several dozen – maybe a few hundred – fly over the town centre at dusk and settle in a mighty holm oak in St Mary’s churchyard. Maybe they’ll grow in number and spectacle; the flock was immense 25 years ago. 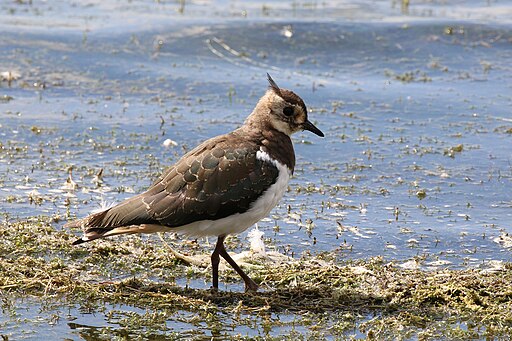 The Coley meadows is a remarkable place to find flocks. These wet marshes have flocks of gulls, mostly black-headed, settling on the pools. In among them is a deceit of lapwings. In early winter this comprise 200 – 300 birds, but in late winter the flock might number closer to 600. They disperse in spring, leaving a few birds to try to breed there. There are flocks of teal, wigeon and mallard too; dabbling ducks that like to scrounge around the marshes looking for food, which must be plentiful. There are dozens of them there all winter.

Occasionally a meadow pipit flock roosts in one particular area of sedges not far from the water treatment works. They have spent winter nights there for years, and for a few minutes at dusk up to 20 fly around as a flock together, before dropping down to spend a frozen night huddled together. I doubt more than a handful of people know they are there.

The most remarkable scene has to be the clattering of jackdaws that gather every winter’s evening without fail. First they arrive in small groups, flying purposefully across the fading sky, heading for the pools to wash and drink, then they head to a group of poplars on the canal bank. They sit in the tops of the trees chattering and slowly growing more numerous as even more birds fly in. Often, when it is almost dark, they take off with a raucous enthusiasm to roost in the ancient plane trees at the heart of the meadows. They are noisy, and can be heard even on a freezing winter’s midnight, but slowly, like children sent to bed, they settle and grow quiet, and before dawn they are up again, chattering and drifting off to their day time haunts in little gaggles.

The Foudry brook which joins the canal at Rose Kiln Lane is warmer, as treated water is pumped into it. The warmth enables insects to hatch all year round, and they in turn attract birds that normally head south in winter. You can find a flock of chiff chaffs there, possibly one of the strangest things. Last winter there were up to 40 there during a blizzard. Even now there are a dozen or more, possibly the only flock of them in Berkshire.

There are a pair of peregrine falcons in the meadows keeping an eye on these flocks. Every once in a while they drift over and almost every bird takes to the wing. The peregrines are watching and noting if there any birds that could easily be picked off. The great mass of birds that wheels in the sky, the superbly synchronised lapwings, the completely uncoordinated gulls and the panicking snipe are an amazing thing to watch. More amazing, and very rarely seen, is the peregrine’s strike. There is no drama until after the high speed assassin strikes, when the bird flies off to a pylon with a hapless victim and sits above the town to eat its meal.

Every bird takes off in panic as well, but it is too late. The flocks have just got a tiny bit smaller.

Made in Katesgrove – tiles for Reading Abbey

Police issue warning about thefts from sheds in south Reading