‘Birdsong’ at the Progress Theatre 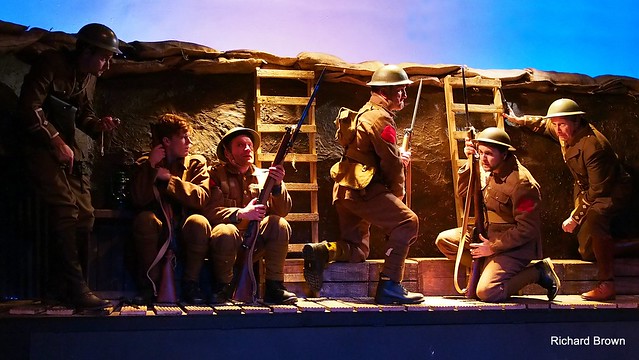 We will remember them…

The Progress Theatre are performing Sebastian Faulks’ poignant Birdsong this week. Cleverly condensed for the stage by Rachel Wagstaff, this story of love and loss alternates between the war torn horror of 1916 and the tranquil peacetime of Amiens and is directed with great emotional insight by Steph Dewar.

The scene opens onto Martin Noble’s sombre multi-level set, incorporating a gaping tunnel mouth… a constant reminder of omnipresent war. We meet the solitary and strange Stephen Wraysford (played with extraordinary emotional intensity and depth by Charlie West), who is gravely wounded. He is tended by Jack Firebrace (a memorably touching performance by Craig Daniels) who proves that good can exist amid this terrible carnage. It is a most affecting moment when Arthur Shaw (a superbly sturdy portrayal by Gareth Saunders) reads a letter telling him of his beloved son’s death… they both kneel to pray for his departed soul. 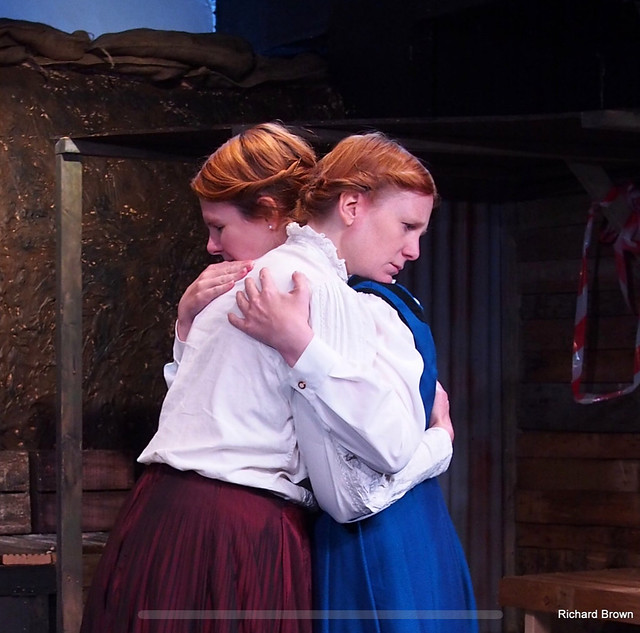 The action is intercut by flashbacks to peaceful Amiens where Stephen has a passionate affair with Isabelle Azaire (played with sensitive introspection by Steph Gunner-Lucas in direct contrast to her forthright sister Jeanne, an illuminating portrayal by Emma Wyverne) who is married to the older and mean spirited Rene (an authoritative portrayal by Peter Chamberlain, who also plays the dignified and commanding Captain Gray). The children are a frivolous delight – the lovely Lisette (flirtatiously played by Esther Arzola, who is also a desultory prostitute!) and Gregoire (the delightfully gauche Jack Hygate who also plays the heart rendingly naif Sapper Michael Tipper). Berard (the irrepressible Alex McCubbin) further lifts the mood with his hearty vocals. 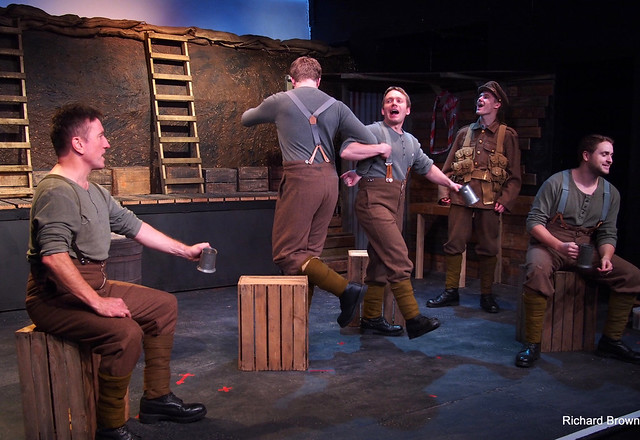 The dark hours of conflict are lightened by the jocular camaraderie amongst the men and especially by the garrulous Gareth Evans (a vigorously humorous portrayal by Harry Petrie).

The end is nearing, as each soldier writes what may be his final letter to family and loved ones, their gaunt and battle worn faces illuminated in turn (affecting lighting by Jon Churchill) against sweet and haunting vocals from Matt Urwin.

A profoundly moving moment follows when, starkly silhouetted against the red battle lit sky, the men go ‘over the top’ into mortal combat to the soaring strains of Barber’s Adagio (a searingly beautiful soundscape by Stuart McCubbin).

The mechanical abattoir of war grinds on… a final harrowing and desperate clawing through the tunnel and it is over. Wraysford, the sole survivor, encounters his enemy, the Hun. They embrace in a highly charged moment of reconciliation.

And high up in the sky, incandescent birdsong soars over the pain and pity of war.

This is exquisitely heart-wrenching theatre. We will remember them…

Birdsong runs at the Progress Theatre, The Mount, Reading RG1 5HL until Saturday 17 November. Tickets can be bought online.