Boobs and other scenes at the Progress Theatre

‘Scenes cut from other plays.’ Photo courtesy of the Progress Theatre.

The Progress Theatre scintillated with their Scenes Cut from Other Plays (superbly scripted by Emily Goode and the Cast and mercurially directed by Rik Eke) depicting madcap tableaux and musical mayhem.

We were enticed in with a Biscuit Selection Pack by the Up the Arts Theatre Ensemble (the slickly hilarious Owen Goode and the winsomely versatile Bethan Perkins) and the promise of dramatic integrity.

Presided over by the somewhat chaotic (Don’t Panic) Rik on Sounds and Effects and aided by slick onstage costume changes, they embark on a theatrical romp… from Shakespearean Soup and food-related puns to the sombre poetry of war, through interpretive dance and poetic performance and an extraordinary performance by Anthony the purple octopus, all culminating in a blockbuster musical finale, featuring the mellifluous Bethan on vocals and guitar and the reluctant albeit robustly musical Owen on banjo. This was a stirringly splendid start to the Progress Theatre’s fundraising evening. 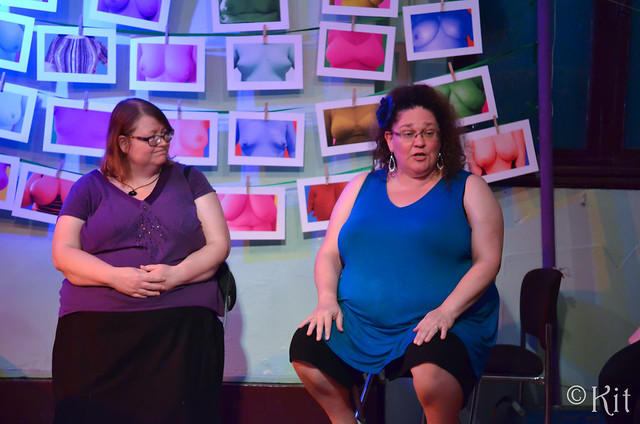 ‘Do my boobs look big in this?’ Picture (c) Norbert Zsidi and Judit Kocsar.

The second play, Do My Boobs Look Big in This? (written by Christine Moran and sensitively directed by Aidan Moran), is fresh from sell-out performances at Reading Fringe Festival 2018.

The script focuses on body image and is based on a series of testimonials from women who agreed to share their feelings about their appearance; members of the cast become the voices of these women, expressing their (often previously unshared) experiences. Individual stories have been cleverly woven into a coherent series of recollections that clearly struck a chord with the audience, judging from the bursts of laughter during comic moments and absolute silence during some rather more serious ones. The spare set (chairs for the cast) allowed the cast to move about freely and the striking background display (large photos of boobs) emphasised the wide variety of experiences and emotions captured in the script.

The exceptionally strong cast (Ali Carroll, Taylor Rupp, Liz Paulo, Liz Carroll and Christine Moran) moved skillfully between comedy and tragedy, adjusting their delivery to suit each story. The heartbreaking moments were offset by hilarious observations: “I remember getting my first training bra… why is it called a training bra? What was it training me for?”

At the end, the audience is left to reflect on the link between self-image and self-worth, and the courage of the remarkable women who contributed such heartfelt stories to the script.

The new season at Progress Theatre starts off with Andrew Lloyd Webber & Tim Rice’s rock musical Jesus Christ Superstar, which runs from 13 until 22 September. Tickets for this musical can be bought online.